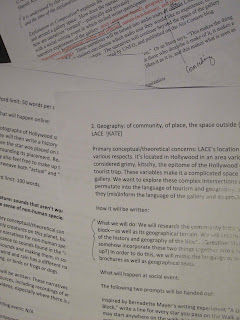 Harold Abramowitz is a writer and editor from Los Angeles. His recent publications include Not Blessed (Les Figues Press), House on a Hill, Part 3 (Slash Pine Press), and House on a Hill, Part 1 (Insert Press, Parrot Series #2). Harold co-edits the short-form literary press eohippus labs. He also writes and edits as part of the collaborative projects SAM OR SAMANTHA YAMSUNFO. and

Amanda Ackerman lives in Los Angeles where she writes and teaches. She is co-editor of the press eohippus labs. She is also a member of UNFO (The Unauthorized Narrative Freedom Organization) and writes as part of SAM OR SAMANTHA YAMS. Her publications include three chapbooks: Sin is to Celebration (co-author, House Press), the recently-released The Seasons Cemented (Hex Presse), and the forthcoming I Fell in Love with a Monster Truck (Insert Press). Her work can also be found in the current edition of Little Red Leaves and The Encyclopedia Project: Volume F-K.

Sarah Shun-lien Bynum is the author of two novels, Ms. Hempel Chronicles, a finalist for the 2009 PEN/Faulkner Award, and Madeleine Is Sleeping, a finalist for the 2004 National Book Award and winner of the Janet Heidinger Kafka Prize. Her fiction has appeared in several magazines and anthologies, including the New Yorker, Tin House, the Georgia Review, and the Best American Short Stories 2004 and 2009. The recipient of a Whiting Writers’ Award and an NEA Fellowship, she directs the MFA program in writing at the University of California, San Diego. She lives in Los Angeles and was recently named one of “20 Under 40” fiction writers by the New Yorker.

Teresa Carmody is a writer and co-founding director of Les Figues Press. Her works include Requiem (Les Figues), Eye Hole Adore (PS Books) and Your Spiritual Suit of Armor by Katherine Anne (Woodland Editions). The chapbook I Can Feel is forthcoming (Insert Press). Her work appeared in the 2009 &Now Awards: Best of Innovative Writing, and in several literary journals, including: Mandorla, Bombay Gin, Drunken Boat, Luvina, emohippus greeting cards 1-4 and more. She was one of the organizers of the original Ladyfest in Olympia, Washington, and co-organizer of Feminaissance, a colloquium on women, experiments and writing at the Los Angeles Museum of Contemporary Art.

Kate Durbin is a Los Angeles-based writer and performance artist. She is the author of the poetry collections The Ravenous Audience (Akashic Books) and, with Amaranth Borsuk, Excess Exhibit, forthcoming from ZG Press. She has written several chapbooks including Fragments Found in a 1937 Aviator’s Boot (Dancing Girl Press), FASHIONWHORE (Legacy Pictures), The Polished You, as part of Vanessa Place’s Factory Series (oodpress, 2010), and Kept Women, forthcoming from Insert Press. She is founding editor of the journal Gaga Stigmata: Critical Writings and Art About Lady Gaga. Her fashion / text project, Prices Upon Request, can be viewed at ZG Press‘s website. She writes about celebrity style for Hollywood.com

Aimee Bender is the author of four books: The Girl in the Flammable Skirt, An Invisible Sign of My Own, Willful Creatures, and The Particular Sadness of Lemon Cake, which recently won the SCIBA award for best fiction. She teaches creative writing at USC.

Allison Carter is the author of a book, A Fixed, Formal Arrangement, and two chapbooks: Shadows Are Weather and All Bodies Are The Same and They Have The Same Reactions.

Mark Z. Danielewski is the author of four books: House of Leaves, The Whalestoe Letters, The Fifty Year Sword, and Only Revolutions, which was a 2006 National Book Award finalist.

Carribean Fragoza is an interdisciplinary writer and visual artist living and working in Los Angeles and in her hometown, South El Monte. She is a graduate of UCLA and CalArts’ MFA Writing Program. She is currently working on several book projects, is founder of El Monte Arts Collective (aka, the El Monte Art Posse) and teaches writing at CalState University, Long Beach. She has published her work in publications such as Palabra Literary Magazine and Emohippus.

Veronica Gonzalez is the coeditor of Juncture: 25 Very Good Stories and 12 Excellent Drawings and the founder of rockypoint Press, a series of artist-writer collaborations, including books, prints, postcards and a reading series. twin time, her first novel, won her the 2007 Premio Aztlán Literary Prize and was voted best novel of 2007 by Eileen Myles in The Believer book awards

Janice Lee is a writer, artist, editor, and curator. She is the author of KEROTAKIS, a multidisciplinary exploration of cyborgs, brains, and the stakes of consciousness. Her second book, Daughter, is forthcoming in 2011.

Harryette Mullen is the author of Trimmings, S*PeRM**K*T, Muse & Drudge, Blues Baby, Sleeping with the Dictionary and Recyclopedia. She teaches American poetry, African-American literature and creative writing at UCLA.

Janet Sarbanes is the author of the story collection Army of One and is currently completing a novel titled This Land: The Adventures of the President’s Daughter. She teaches fiction and narrative in the MFA Writing Program at CalArts, and cultural studies in the School of Critical Studies.

Anna Joy Springer is author of the illustrated novella The Birdwisher, and two forthcoming works: The Vicious Red Relic, Love, a fabulist memoir, and In An Egg, a graphic narrative. Formerly a singer in the Bay Area bands, Blatz, The Gr’ups, and Cypher in the Snow, she currently teaches creative writing at UCSD.

Stephen van Dyck is a writer and curator. He is currently complete his first book, People I’ve Met from the Internet, a conceptual writing project, coming out story and field study in the form of a very long annotated list.