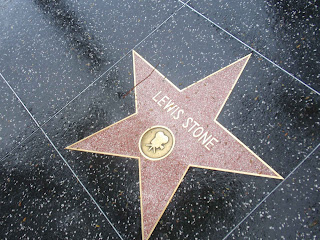 As part of the ongoing Explanation as Composition audio tours: About the stars on Hollywood Boulevard. Star #6: Lewis Stone, by Colin Dickey.

It is almost three miles exactly from 6524 Hollywood Boulevard to 455 South Lorraine. It is mostly downhill, and you can take Vine all the way down, until it turns to North Rossmore at Melrose and curves slightly to the west. At third you turn east, heading six blocks to Lorraine, where you'll turn right; you'll find Stone's former house at the end of the block.

The evening of September 12, 1953, Stone and his wife were watching television when they were disturbed by a noise in the backyard--three teenage boys were busy throwing his lawn furniture into his pool. It was not the first time they had harassed his home, and, incensed, he chased them. He made it to the sidewalk before he collapsed, dead from a heart attack.

His funeral took place in the massive ballroom of his home, under a reproduction of a Raphael Madonna. The funeral was conducted by Ernest Shurtleff Holmes, founder of the Institute of Religious Science. Holmes created Religious Science in 1926, not as a church but as a form of New Thought, a pantheistic spiritualism teaching that God is in all things, from the planets to the dirt beneath our feet, available as a force for anyone who recognizes this and aligns her/himself with it. From Venice, Holmes attracted a number of celebrity converts, including Cary Grant and Peggy Lee.

The Institute of Religious Science is not the only religion founded in Los Angeles, nor the only one to attract A-list celebrities. Among the many stories of Los Angeles is that of its cults and pseudo-religions, that spring up overnight to minister to the washed out and wasted alongside the famous. But the real religion here is not in the temples and celebrity centres, nor is it in celebrity itself, though it's easy enough to make this claim. Who remembers Lewis Stone now? There are over 2,400 stars on the Hollywood Walk of Fame, yet many of them are names already forgotten, though the Walk is barely 60 years old. And what religion would have room for such a massive pantheon of fleeting, minor deities? How to hallow so many nameless gods?

Perhaps the real divinity is not in celebrity, but in the ground, in the soil. Maybe that's why we put these names beneath our feet, so that they might join it.