The auction is only a week away, so if you haven't RSVP'd, now is the time. The reception begins at 7:00 p.m.; at 7:30, there will be a performance of particular auction items, with appearances by Eileen Myles, Sawako Nakayasu, Christine Wertheim, Allison Carter, Danielle Adair and more. Bidding begins at 8:00 p.m., for 45 minutes only, followed by another performance.

Some new items just in:

To RSVP, post your reply card, OR respond to the evite, OR email us at info@lesfigues.com.

Another Les Figues Auction Donation—Make Your Own Tiny Spectacle, a lesson by Susan Simpson

Susan writes, "Toy Theater or Paper Theater was a popular means of staging dramatic spectacles in Victorian parlors. It was all the rage in homes across Europe and the U.S. As children, Oscar Wilde and Jane Austen, Laurence Olivier and Orson Welles all delighted in re-enacting their favorite literary works and hit dramas by staging them in two dimensions on a miniature proscenium stage that looked something like this...

Eventually, the small box in the living room was replaced by another, the television; and toy theater became outmoded. But now you can bring it back. You can make your own toy theater production and entertain your friends in your parlor with miniature performance of your literary favorites. Just imagine Dies: A Sentence the Toy Theater version.

Join Susan Simpson for a lesson and build a toy theater production of your own. 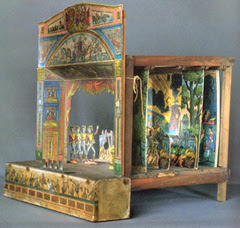 Donations keeping coming in! Most recently:
And there's more too! Thank you to everyone who's donating, and supporting Les Figues.
No comments:

How Fabulous These Somethings Are

Thank you to all the artists and writers who are preparing a special donated "something" for the "Give a Fig" auction. These include Susan Simpson and Eileen Myles, Sawako Nakayasu and Ken Ehrlich. Plus there's Janet Sarbanes, Anna Joy Springer, Ali Liebegott, Ara Shirinyan and High Energy Construct's Michael Smoler. We also have a Xena Warrior Princess poster, signed by Lucy Lawless to Vanessa Place (who wrote some Xena episodes), and a Bird & Bull Press original scroll, courtesy of Joe Milazzo. Allison Carter is donating a lesson in website development, and Elena Karina Byrne is offering both editing services, and PR for Poets. Deborah Lowe is going to make - which I believe, in this case, means bake - something special. (She makes very good desserts.)

And there's more too -- Coming Soon!
No comments: