Boil boil toil and trouble
Hey, Graymalkin Here’s my weird mix; Midwinter Day by Bernadette Mayer, Women, The New York School And Other Abstractions by Maggie Nelson (a critical text de jour at least on this coast?), Grave of Light by Alice Notley—ok so these make sense—Signs of Life by Eduardo Kac, Social Network Analysis by John Scott, Wayfare by Patiann Rogers, Artscience by David Edwards—I guess they still are marginally related (a network diagram might help matters, see fig. 1 below and thanks to Debra di Blasi for her inspirational Jiri Chronicles network—quail make strange networks), Witch Craze: Terror and Fantasy in Baroque Germany by Lyndal Roper, Harry Potter and the Goblet of Fire by J.K. Rowling (to my kids) and Clutch of Constables by Ngaio Marsh because my brain hurts. 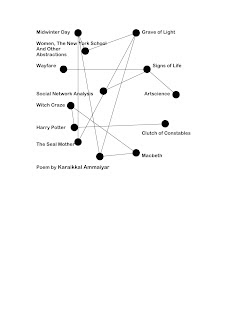 When shall we three
I also recently read The Seal Mother by Mordicai Gerstein. Have you read it? The legend of the selkie reminds me of the movie by John Sayles, The Secret of Roan Inish which I really liked (me being the “love little kids floating off in coracles” type) but have not watched recently. I do remember wanting the little girl to be my own daughter—my daughter is similar and different in her own way.

In The Seal Mother, the selkie takes off her seal skin on midsummer’s night and dances as a woman in the moonlight. Her skin is stolen by a fisherman who coerces her to marry him for seven years. They have a son who overhears her pleading with her husband (after seven years) for her skin back. He replies that he will not leave his son without a mother and that she must promise not to leave them…a promise she refuses to make. The son finds the skin and returns it to his mother who carries him to sea for a visit with her family and then returns him to a life out of the water, with periodic visitations.

So, when I read this to my kids last week (not for the first time) I stopped short at the conversation between the husband and wife, spoken in earshot of the child. There was something embedded in the story about what a woman is before children and what she is after and how her choices are made. One thing I liked very much was that her choice to return to a life in the sea was not viewed as a selfish decision (despite the fact that she was clearly not “opting-out”). Of course, the coercion by the father mitigates what society might sea as selfishness (oh that evil thing) on the part of the mother but still, I wonder what sort of streams of longing have run through this legend and its many iterations over the ages.

[As an aside: Here's how our writing can confuse those we love--Willie has commented after reading my blog that now everyone will know when I leave him with the kids that it was coming as I am, apparently, a selkie. I should have been clearer that my thinking about the selkie was more about a woman finding some piece of her self, separate, than physically finding herself a separate piece from the family. No, Willie, my leaving is not imminent despite the fact that the kids gave me my skin back for mother's day.].

I think, by the way, my interpretation of this story, myth, in this light is in part because of my own circumstance (I feel guilty even comparing them…no I do not want to abandon my children…but then where am I?) and in part because reading Mayer and Notely at this point in my life, when I have a more mature brain, has been incredibly liberating.

And what did that woman, that seal mother, do all day while he was out fishing and her own skin dried up, waiting for her, in the hidden cave, below the waterline.

Ere the set of sun

Older, postreproductive women bore the brunt of the witch trials. I’m getting older, though I not yet post repro (but done with being pregnant that’s for damn sure). Sometimes I am in a frenzy as I hammer nails into my own coffin—because this part of my life is over and this part and this part and holy shit I even look old.

I wish age was power, but it sure as shit is not right now, anyway, especially for a woman, especially when Madonna looks like a plastic replica of her self (now how the hell much work has she had done? Oh but those hands, my my...something we all should start worrying about right away)

but look at this lady (Karaikkal Ammaiyar, in a sculptural representation from the Metropolitan Museum of Art):

Here’s a translation (not by me) of one of her poems to her god, Siva:

The ground is damp with liquid marrow--
Skeletal ghouls with sunken eyes
jostle and elbow--
looking furtively around them
extinguishing the fires
with gleeful hearts
they eat half-burned corpses--
There, in that menacing forest
holding fire in his hand
dances our beautiful lord.

Not to get into problems of a) interpreting ancient Southeast Asian experience with modern English/Welsh/German/American eyeballs (but hey, there’s some suggestion the Celts and the ancient Indians making the Vedas were pretty damn close, brothers and sisters and such), and b) the problem of our feminist brains trying to overlay interpretation on saints of any stripe who forsook their material lives for spiritual spouses. But isn’t that a nice poem. It’s the sort of poem that makes folks in the west stereotype Siva as a fearful god. But you know, one meditation technique in both Buddhist and Hindu approaches to yoga is to imagine one’s death—to meditate on it. For those of us who’ve had that suicidal thing it’s a lot healthier than fighting it—recognize death and allow the self a little bit of time not to be weighed down. It makes it easier to come back.

When the battles lost

Anyway…I’m off subject. I was thinking about old women and the way they’ve been dismissed and demonized. The accused witches might have found their only little piece of power in the fear in the eyes of the judges and the assembled witch tribunal—the better the story the greater their sense of power in those moments before the fire was lit or the noose was strung. 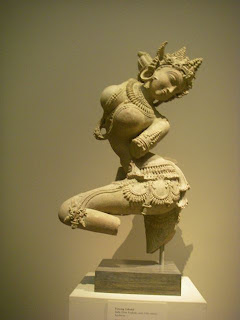 But look at Karaikkal Ammaiyar. She is old (the legend is she wished to be so and her beauty was taken). Her breasts are pointed and sagging--in great contrast to representations of rounded goddesses of medieval India (see picture I took at the Museum left)--her head bald. (Her elongated ears are a not uncommon trait found on Buddhist and Hindu devotional sculptures at the time). She’s considered “a hag” by some…but wow, she’s beautiful and powerful and attractive to Siva (and isn’t that what we all want…or at least some of us, or, well…, anyway…). Ok, my point, where’s the hag in western spiritual traditions except on the pyre. 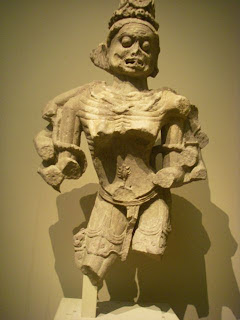 And one more picture: Chamunda, horrific destroyer of evil (Taken by me again, at The Met--that's what I was doing during AWP, staring at Chamunda and wishing for a scorpion on my belly instead of stretch marks. Maybe I'll get a tattoo). She's a good one to have on your side and I've never found anything like her around here.

I've been thinking a lot about aging Jen, and identity pre and post becoming a mother. Since I'm on the pre side, theoretically I still have my watery skin and I haven't made the deal with/been tricked by the fisherman yet. And yet, it doesn't feel like I'm in open water enjoying my identity as a being of the sea either. Like so many women I'm actually on the rocks at the tide line, feeling a desperate pressure to get the hell on to the beach and start dancing in the moonlight, hurry up before its too late (http://www.npr.org/templates/story/story.php?storyId=90227229)
while a small voice also says ("you don't even know if you CAN dance--you've never danced in the moonlight or taken your skin off, what are you thinking?"). Tidal pull tidal push. Sea and shore is a great analogy since the tidal area can be so much more violent and eroding then either the depths of the ocean or inland. I think the selkie was getting trashed by the tide before she decided to dance.

I was listening to NPR's coverage of Simone de Beauvoir's centenary celebrations this year (http://www.npr.org/templates/story/story.php?storyId=90344028)
and was reminded of how powerfully sad her writing about women and aging was and is:

"I loathe my appearance now: the eyebrows slipping down towards the eyes, the bags underneath, the excessive fullness of the cheeks, and that air of sadness around the mouth that wrinkles always bring…The moment has come to say: ‘never again!’…never again a man. Now, my imagination as well as my body has come to terms with this. Yet it’s strange not to be a body any more…what breaks my heart, much more than these deprivations, is to find within myself no new desires…if this silence is to last, how long my brief future will seem!”
---Simone de Beauvoir, The Force of Circumstances

I think that these older women in your statues are powerful figures in helping us face our lack of control. Not by providing a sense of direct-from-god fate, not by just representing our discrete biologies, but by providing us with stories to remind us of the growing wisdom of our bodies and minds. I know that the whole "honor the wise old folk" doesn't really deal a death blow to the constant barrage of "quick, have babies, you're becoming worthless" or "quick, get rid of wrinkles, you're about to be negated" but there is an alternative:

I think I'd pick that over Botox, given the option.