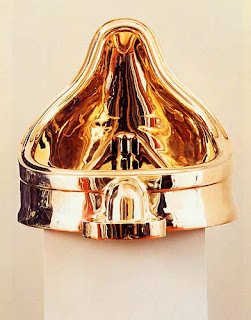 As alluded to, there was the sticky gender wicket precipitated by the lack of women represented in Make Now's forthcoming UBU Web anthology (31 entries, 2 by women), eds. Dworkin & Goldsmith. As noted, the issue was/is/will be being addressed. My addendum thought is that this appears remarkable, given not only the major role played by women in appropriation art (everything from Kathy Acker's plagiarism trial to Louise Lawler & Sherrie Levine's 1980s visual mimicries & modifications to J. Spahr's work), but also as appropriation art is the art of the likeness of the likeness -- the traditional subject/object flux (fluxus?) occupied by women. It's the point where mimesis, in its most radical form, shouts out the difference in reproduction (and the reproduction), pointing out the hierarchy latent in likeness.

The Make Now Anthology will have more than 100 contributors. It will not be called the UBUWEB Anthology of Conceptual Writing. Kathy Acker is not conceptual just because she plagiarized. I mean, people can call her work what they want, but plagiarism doesn't automatically make for conceptual. Coleridge plagiarized, a bit. But I seriously don't want to get into a web argument.

Apologies for dovetailing the UBU anthology with the Make Now book; from your comments to me, I understood that you were publishing the UBU-work. Yes, of course Acker is not conceptual "just because" plagarized. However, she is a conceptual writer in the orchestration of her (overt) plagarisms, and at the very least is a formidable antecedent. Or as much so as many of the UBU (though not, it should be noted, Make Now) contributors.

Also, just to clarify, I noted that Acker played a significant role in appropriation art, not that she was strictly conceptual. The UBU anthology includes Rauschenberg, also not a conceptual artist in the narrow sense. I look forward to reading the more inclusive Make Now anthology.

Also looking forward to the Make Now Anthology, and rather hoping the definition or presentation of "conceptual" there also has fuzzy borders. Just thinking of appropriation (and this seems to me not the only method of conceptual writing), how much appropriation, and just what kinds of uses or framing of such appropriation, make a work conceptual? I would hope we don't leap to pin this down too precisely.

Chas: I think appropriation is one technique used in much conceptual writing, but is not necessarily a defining technique. Rather like bronze viz sculpting. What do you think?

Whenever it comes to genre definitions, I always think of Wittgenstein's comment regarding definition that "Isn't a loose definition often exactly what we need?"

This is particularly true in innovative artistic practice, I think, in which one element is often a desire to take a prior definition of a practice and reshape it for new possibilities.

And of course the other issue floating around here is that when it comes to anthologies or conferences or anything else regarding a gathering of art work and artists, the definition of a field inevitably implies issues of inclusion and exclusion. Defining a term in a certain way always goes hand in hand with defining what artists and works do or don't fit the definition.

Or as my friend Jeff Hansen once put it, "To edit an anthology is to be hated." If one is lucky, now and then a few positive things do also happen because of anthologies. But I wouldn't go getting all hopeful about that.

perhaps the idea of what it means to conceive differs by gender?

Coleridge was in many ways translating and interpreting (though that is all writing is(and conceptual is in the interpretation, but who cares; it is all oranges and oranges and more oranges)). Though it does not matter everything is always already conceptual when it hits the air of the human brain. Coleridge is an echo. As is everything else that is mired in mimesis--as all writing/language is. So Colerigde loved German philosophy--he worked it into his aesthetics and owned it. Owned it. Whatever that means. I am sure he didn't think he was fooling anyone that he wrote Biographia Literaria for--such as his homosexual compadre/greatest lover, Wordsworth. All men or mostly men in a volume means that the typical hierarchy is at large and well--but the homosexual love of men it there too. Patriarchy = Homosexuality(and this part is cool). Yes this is fun and games to an extent. Heather Lewis wrote the book Notice. The book is all in the body. All over the body. From the main character who is nameless being raped repeatedly to having her pubic hair and pubic hair pelt removed with a knife.

It is sheer laziness that women are not tracked down for anthologies of any sort. and it is hate that keeps them out. Anyway you slice it you can hang that pelt around your neck in a glass vile. a chunk of rotting flesh. a token of the kill.
lv,
tracy b.