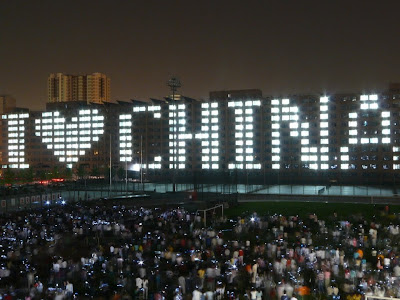 Could I stretch points to say the bird’s nest in Beijing is string theory blown to smithereens? Could I articulate a connection, dull as the side of a knife, between the cache (current) of conceptual writing and the collage (effect) of the montage (effect) of the September 11th? Could I maintain in argument that our May 1968 occurred later that very September (2001), but went for some time unrecognized because we assumed the face of the revolutionary would be unlined? Would dress left? Would clutch a big paper cup of coffee with room and eat egg whites, no bacon? Could I honestly admit that the crackdown of the Chinese is as open and accessible a face of a revolutionary culture as our own crackup? And as centralized? What does this have to do with our need to itemize? Or, as the soft-shoe crowd would say, fashion the indexical? Fashionable, I mean, I mean if I were saying what could be said. Could you stand to be so right?

String theory would have China backing up in my drain would it not? I swear I tripped over a bit of that bird's nest just yesterday...