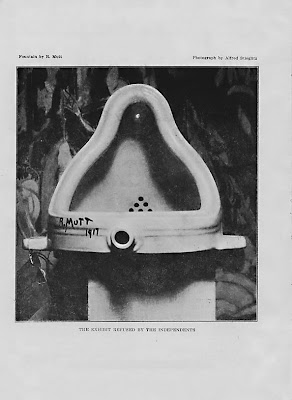 They say any artist paying six dollars may exhibit.
Mr. Richard Mutt sent in a fountain. Without discussion this article disappeared and was never exhibited.

What were the grounds for refusing Mr. Mutt's fountain:

1. Some contend it was immoral, vulgar.

2. Others, it was plagiarism, a plain piece of plumbing.

Now Mr. Mutt's fountain is not immoral, that is absurd, no more than a bath tub is immoral. It is a fixture that you see every day in plumbers' show windows.

Whether Mr. Mutt with his own hands made the fountain or not has no importance. He CHOSE it. He took an ordinary article of life, placed it so that its useful significance disappeared under a new title and point of view – created a new thought for that object.

As for plumbing, that is absurd. The only works of art America has given are her plumbing and her bridges.
#2: The For Godot Case (Stephen McLaughlin, 2008)

So I started a collection of poet names. Once I had around 1500, I asked my friend Jim Carpenter to send me a batch of 5,000 poems composed by Erika T. Carter, his ludicrously advanced poetry generation software. These poems aren't simply random cutups of randomly selected texts. As you can see by reading them, they each have a thematic & stylistic unity unparalleled (so far as I know) in the field of algorithmic poetry generation. As numerous commenters have noted, it's difficult to tell whether some of these things were written by man or machine. Surprisingly, many of the poems in the magazine are actually 'good.' Sort of.

Thanks for the link to the complete For Godot anthology!

I kind of like the sort of background poem "written" in mica by our very own wondrous Vanessa Place.