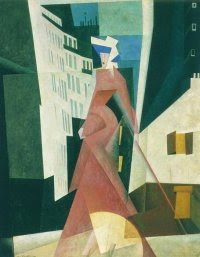 I have long been a participant in Les Figues Press’ Mrs. Porter Salon, where I have presented, over the years, my research on Mrs. Porter, a figure in T.S. Eliot’s The Waste Land based upon a notorious brothel owner in Cairo during World War I. Two key aspects of my project have been untangling the literary construction of Mrs. Porter and the daughter she drags into prostitution, and combing through historical research into the seamy circumstances of the historical Madame Porter.

This is the first in a series of blog entries about my Porter project. Inspired by Paul Hoover’s Sonnet 56, which offers 56 variations of the Shakespearian sonnet , I thought I would submit a key passage from The Waste Land to some of the same constraint-based methods that Hoover uses.

I must say, it felt good.

A woman like Mrs. Porter requires constraint. Allow us to exercise some. I will take as my source-text 14 lines from “The Fire Sermon:”

And bones cast in a little low dry garret,

Rattled by the rat’s foot only, year to year.

But at my back from time to time I hear

The sound of horns and motors, which shall bring

Sweeney to Mrs. Porter in the spring.

And on her daughter

They wash their feet in soda water

In my first variation I performed a mechanical Oulipian displacement, replacing each noun with the seventh word listed after it in a dictionary. The results were a bit uncanny.

And bone heads cast in a little low dry garrulity,

Rattled by the ratatouille’s foot boy only, yearn to yearn.

And on her dauphine

They wash their Feininger in sodium alginate

I had to consult two dictionaries: The American Heritage Dictionary of the English Language, Houghton Mifflin, New York, 3rd edition, 1992, and Collins French-English English-French Dictionary, Berkley Books, New York, 1982. (I must say it was such a pleasure to flip through a dictionary again, scanning the photos in the margins and making serendipitous discoveries on every page. )

The exercise revealed something about The Waste Land that I hadn’t noticed before: it’s so often regarded as a High Modernist Intellectual Landmark, that you forget to notice how basic its Anglo-Saxon vocabulary can be. Usually, the word in the poem that I was replacing – body, ground, bone, rat – had the largest footprint on each dictionary page. These are the basic building blocks of the English language so when you venture a mere seven words away, you may still find yourself caught in the thicket of that word.

What’s remarkable is when the replacement casts an edifying (or often ironic) light on the source material. Since Eliot’s method in The Waste Land is to juxtapose words, ideas and historical references from different cultural/temporal/spatial registers, the extra displacement that noun+7 introduces hardly shatters the poem – often it breathes into it a bit of life.

works beautifully, not only because of the carpe diem theme introduced just three lines later, but because of the marvelous foreshadowing of the bawdy Mrs. Porter, and her daughter, whose cherry her mother has sacrificed for good money. A ground cherry, by the way, is a plant with “small globose, fleshy fruit enclosed in a papery, bladderlike , persistent calyx.”

While I think every displacement adds something fresh and, yes, meaningful, to the poem, I do have my favorites:

Eliot’s deft re-working of Andrew Marvell’s “To His Coy Mistress” and “Parliament of Bees” was already interesting, but now it’s even more so. Here are the original lines from “Bees:”

When of the sudden, listening, you shall hear,

A noise of horns and hunting, which shall bring

Actaeon to Diana in the spring,

Where all shall see her naked skin

Casting Mrs. Porter as Diana, the chilly mistress of the forest, who had Actaeon tortured and killed for accidentally seeing her bathe, is a rich piece of irony. But replacing car horns with Marilyn Horne is (you must admit) pretty darn funny. Replacing “motors” with “motor cortex” is almost as marvelous, since it amplifies Eliot’s disdain for the raw, instinctual drive that sullies all modern romance. Mrs. William Sidney Porter (that is, O. Henry’s consumptive wife) will get her “spring cleaning” from Sweeney all right.

A very loose translation of the French line (which is a riff on Parsifal) might be, “And Oh these vanishing endings, singing in the aching!” To have moved from children (l’enfants) to intimations of death (l’enfin) poignantly captures the spirit of The Waste Land, where spring and its new beginnings are met with a sense of dread.