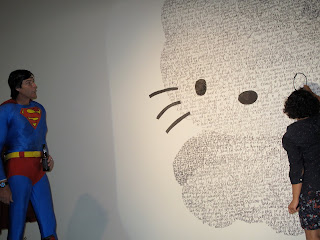 Thank you to everyone who came out for the Public Interest Kick-Off event at LACE. You can read a report of the event on FUNCTION: PARTY CRASHER (excerpt below)

"Approaching the LACE (Los Angeles Contemporary Exhibitions) gallery, I noticed that a man dressed as Superman was hanging outside on the sidewalk, talking to people. There was also a man in a two-piece suit running on a treadmill, painting oil portraits. I didn’t blink twice. I mean, this is Hollywood, weirder things have happened. And this kind of welcome definitely boded well for an interesting evening."

Also, we now have a website for Not Content, thanks to the amazing skills and generosity of Amar Ravva. Not Content is on facebook too, with photos and information about the next event: Not Content Performance 2, with readings by Douglas Kearney, Vanessa Place and a Feral-Cat Attack as conceived by Divya Victor. These performances will mark the end of their residencies (though Place's Statement of Fact will be on display through July 19).

We are very happy to announce NOT CONTENT, a series of text projects curated by Les Figues Press as part of the year-long initiative PUBLIC INTEREST at LACE (Los Angeles Contemporary Exhibitions). Concentrated in the summer season (June 21-September 30), and extending, to a lesser degree, through the fall, winter and spring, NOT CONTENT brings together an international group of writers who will be “in-residence” at LACE. The writers will investigate the ways in which language functions within public and private spheres and within the tenuous space between these real and imagined realms.

Please join us for the Summer Solstice Kickoff on Monday, June 21, 2010 from 8-10 PM, featuring work and/or performances by the first three writers-in-residence Douglas Kearney, Vanessa Place, and Divya Victor.

Douglas Kearney: June 21-July 12. COVERAGE: Drawing from BOOM, MESS and SPILL, each with its own language, COVERAGE will overflow and choke, creating its own mess of gulfs. Maybe you should clean it up, huh? Tag, you're it. What's the story of what just happened here?

Poet/performer/librettist Douglas Kearney's first full-length collection of poems Fear, Some, was published in 2006 by Red Hen Press. His second manuscript, The Black Automaton, was chosen by Catherine Wagner for the National Poetry Series and published by Fence Books in 2009. In 2008, he was honored with a Whiting Writers Award. An Idyllwild and Cave Canem fellow, Kearney has performed his poetry at the Public Theatre, Orpheum, and The World Stage. His poems have appeared in journals such as Callaloo, jubilat, nocturnes, Ninth Letter, Washington Square and Gulf Coast. Born in Brooklyn, now living in California's San Fernando Valley, he has a BA from Howard University and an MFA in Writing from the California Institute of the Arts, where he now teaches courses in African American poetry, myth, hip hop and opera. http://www.douglaskearney.com/

Vanessa Place: June 21-July 19. STATEMENT OF FACTS: A poetic self-appropriation from Place's legal appellate briefs, STATEMENT OF FACTS sets forth, in narrative form, the evidence of the crime as presented at trial. What is a fact?

Of Vanessa Place and Robert Fitterman’s Notes on Conceptualisms, Mary Kelly said, “I learned more about the impact of conceptualism on artists and writers than I had from reading so-called canonical works on the subject.” Place is also author of Dies: A Sentence, La Medusa, and The Guilt Project: Rape, Morality and Law, based on her work as an attorney representing indigent sex offenders on appeal. Place is co-director of Les Figues Press, and a regular contributor to X-TRA Contemporary Art Quarterly. Her most recent work is forthcoming in French by éditions è®e, as Exposé des Faits, and in English by Blanc Press, as the triology, Statement of Facts, Statement of the Case, and Argument.
http://fr.wikipedia.org/wiki/Vanessa_Place

Divya Victor: June 21-July 12. HELLOCASTS: A re-transcription of Charles Reznikoff’s book Holocaust, a poetic composition that appropriates the transcriptions from the speech of witnesses at the Eichmann and Nuremberg trials, into the shape of Hello Kitty. Part cartoon cat, part ubiquitous icon of popular pleasures, part branding of mouthless feminine forms, part symptom of our collective enthrallment with the cutely dependent and the seductively silent.

Divya Victor is from India, Singapore, Baltimore, Philadelphia, Seattle, and Buffalo. She has a Masters from Temple University and is a PhD. candidate in the English Department at SUNY Buffalo. Her work has appeared in ambit: journal of poetry and poetics, XConnect, ixnay reader 3, dusie, President's Choice, P-QUEUE and Drunken Boat. Her recent chapbooks are SUTURES (Little Red Leaves) and Hellocasts By Charles Reznikoff by Divya Victor by Vanessa Place (ood Press). http://oodpress.net/ 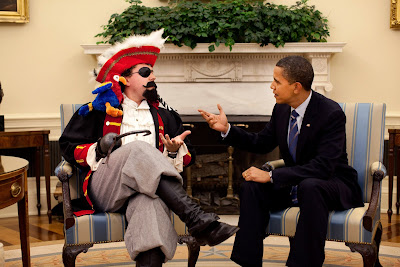 Karmin: What do you miss most about the Chicago literary community? Myopic Books? Danny’s? The Red Rover Series?

Karmin: How about the idea that we don’t need a poet laureate, we need a league of poets?

Obama: They're playing basketball; love that basketball. It’s true - I’m hot, black and clever. I don’t intend for these attributes to cloud the fact that I’ve let down the people that needed me most. Michelle and the kids have adjusted to their new hot maid. She trapped me like a fly in the web of her argument. I knew she hadn't lived in Seattle for long.

Obama: Chicago's biggest poetry secret -- an alderman, I can't disclose more -- has refused to read since the Sears Tower was renamed. The public must acknowledge its accountability. I'm more concerned with rehabilitation. I’ve heard the snow battered, wind-torn, puzzled, patterning.

Karmin: Are you satisfied with the way we’re conducting the wars in Iraq and Afghanistan?

Obama: Serenity is the array of wildflowers niched in ruin. War is the failure. A preliminary remark on the completely artificial nature of this situation. Archaic - to place trust, rely. Antonyms - despair, disbelieve, fear. Practical applications of hope in the theater of war diminish. It’s difficult to prove they existed. It's a sure thing, like a bat's wing. I love questions that provide an opportunity to talk about people on both sides getting killed.

Karmin: Does love come into this?

Obama: Veritable madness is all derangements of our minds, illusions of self-love, passions carried to the point of blindness. I’m beside myself with myself. When you're cool and president, it's hard to stay focused because I quit smoking. I enjoy a game of Scrabble to take my mind off Fox. When you're standing on a street, you frighten people -- even if you compliment their haircuts, even when you're wearing a hat your sister knitted. Clothing of delight, softest clothing wooly bright. There's something wrong with this suit. Good luck with that game of tax Jenga.

Obama: Butterflies run and play with hummingbirds. Listen…I was told that DC has an impermeable, invisible membrane around it that prevents suffering from entering and empathy from escaping. Everybody's hungry to know the best way, so what to do with this appetite? White wine plus people-watching equals fun time-kill. I don't even drink tea, prefer beer and a Marlboro. Having a Coke with you is more fun than going to Jersey.

Jennifer Karmin is the author of the text-sound epic Aaaaaaaaaaalice (Flim Forum Press, 2010). 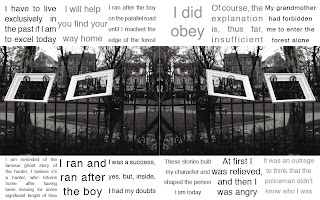