Colin Dickey is the author of Cranioklepty: Grave Robbing and the Search for Genius, and co-editor (with Nicole Antebi and Robby Herbst) of Failure! Experiments in Aesthetic and Social Practices. His fiction and nonfiction have appeared in Lapham’s Quarterly, Cabinet, and TriQuarterly. He’s a distinguished alumnus of his elementary school.

David Emanuel has collaborated with artists to make performance installations, zines, and occasional artifacts. His writing, both critical and creative, has appeared online and in print in How2, Court Green, and With + Stand. He currently lives in Providence, RI where he is a graduate student in the Literary Arts program at Brown University.

Cheryl Klein is the author of Lilac Mines (Manic D Press) and The Commuters, which won City Works Press’ Ben Reitman Award. She recently received a grant from the Center for Cultural Innovation to complete a novel about wayward circus performers. Her fiction has appeared in The Normal School, Other, and several anthologies. She directs the California office of Poets & Writers, Inc. by day and blogs about life, art and carbohydrates at breadandbread.blogspot.com​.

* A short animated preview of the novel Ghosts by César Aira; animation by Susie Kirkwood and Jill Summers, original score by Daniel Knox.

* Where a Blade Becomes Horizon by Simone Muench. Muench’s poem-film, or cinematic poem, uses juxtaposed footage of numerous horror films superimposed with a patchwork of various poetic texts and music.

* What do you Believe?" An installation of real life monster encounters by illustrator Marika Paz and researcher Patrick Summers.

* Next Objectivists: Transcriptions. From behind typewriters, they'll transcribe the thoughts and worst fears of Chicagoans.

* The Whitechapel Club by Pocket Guide to Hell. Taking its name from Jack the Ripper's London haunt, the Whitechapel Club was a Chicago press club in the 1890s that gathered together world-weary Chicago journalists for drinking, singing, storytelling, and general carousing.

* The World As Text, a summer reading room and exhibition crafted out of re-purposed furniture.

The Printers' Ball is presented by the Poetry Foundation and Poetry magazine with the Center for Book & Paper Arts, the Chicago Underground Library, Columbia College Chicago, and MAKE. 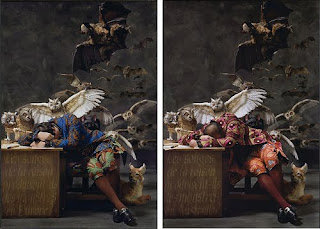 Saehee Cho holds an MFA in Writing from The California Institute of The Arts. Her work has been featured in Sidebrow, decomP, BAP, PANK and Out of Nothing. She lives in Los Angeles.

Margaret Wappler writes for the Los Angeles Times about arts and culture, and has been published in Black Clock, The Believer, Joyland, LA Weekly, Rolling Stone and the upcoming debut issue of Public Fiction. She read from her novel-in-progress at the Hammer Museum earlier this year with Ann Beattie, and also presented at the EMP Pop Music Conference at UCLA. She is finishing a novel that explores environmentalism, the suburban landscape, and alien spaceships.

Romantic irony is my inclination (Wallace Stevens more than John Ashbery), with Oulipian tendencies. This can be seen in my Sonnet 56, sincerity tempered with humor. I love the poetry of César Vallejo and Carlos Drummond de Andrade. I’m also fond of the metaphysical: Emily Dickinson, George Herbert, and Thomas Traherne. Stevie Smith’s poem “Pretty” is amazing to me.

2. Where did you come from and are you happy that you’re no longer there?


I was born in Shenandoah Valley of Virginia and raised in the rural and small-town Midwest by a children’s author from Pocahontas County, West Virginia, and a Church of the Brethren minister from Maryland. Our church was related to the Amish and Mennonites, and we were southern by accent and culture. No world or family connection remains for me in the places I lived before moving to Chicago in 1968, such as Girard, Illinois, and Danville, Ohio.

Someone told me that my work contains “difficulties,” but I see it as utterly precise and transparent. If I had to offer only one of my poems, it would be “The Mill” from Poems in Spanish. My favorite poems in Sonnet 56 are “Villanelle,” “Ballad,” and “Course Description.” Another recent book, Edge and Fold, contains two long serial poems that are serious and lyrical in tone; so does a forthcoming book, Desolation : Souvenir. At the same time, playfulness and a quick turning of the thought has always been a feature of my writing. Ashbery’s lines from “Paradoxes and Oxymorons” ring true for me: “Play? / Well, actually, yes, but I consider play to be a deeper outside thing.”

I live in Mill Valley, California, but also spend a lot of time in the Coyoacán area of Mexico City.


In the social realm, I would push rather than shove and hope for the same in return. Pushing can at least be seen as encouragement. The tropes of pushing and shoving, as identities with a slight difference, model an area of consciousness that is active in my work. I like the self-cancelling gesture, the near-miss, the double strike, the palimpsest, and one hand writing what the other erases.

Wallace Stevens wrote that every poet must be something of a peasant; Frank O’Hara spokes of “evoking overtones of love without destroying love’s life-giving vulgarity.” The limit of bawdry (earth) in the poem is also its limit of beauty. Better to be “the lion in the lute” than “the lion locked in stone.” (“The Man with the Blue Guitar,” xix)

7. As Gertrude Stein says “let us why why.” Please proceed.

Perhaps Stein was saying, “Why ask why?” There’s no point in asking people why they behave as they do, such as carry a butcher knife under the driver’s seat to insure a safe journey home. Likewise it’s pointless to ask ourselves, “Why write?” or “Why do I write as I do?” I love to read statements of poetics. It’s one of my favorite writing genres, but much of it is contradictory wish fulfillment, like Eliot’s insistence on the impersonality of poetry in “Tradition and the Individual Talent,”1919. Three years later, he wrote “The Waste Land,” which contained references to his wife Vivian (“My nerves are bad tonight”), his seduction of her, or her of him, in a narrow canoe, and his nervous breakdown and hospitalization in two locations, on “Margate Sands” and the banks of Lake Geneva: “By the waters of Leman I sat down and wept.”

The “why” of writing can cause it to move laboriously from one predetermined point to another. Proceduralism and Oulipo are attractive to me because their “why” is playful and encourages swerving.

(1) It makes me want to name all my children Rainer Maria. (2) It makes me feel, as an artist, superior to ordinary people. (3) It has made me into a more deeply satisfying sexual partner. (4) It allows me to gaze upon the Pacific “with a wild surmise.” (5) It allows me to identify equally with Fay Wray and the great ape who desires her.

Raindrops on roses and whiskers on kittens

Doorbells and sleigh bells and schnitzel with noodles

Snowflakes that stay on my nose and eye lashes


I try not to ask many questions. I’m a got-all-the-answers, ham sandwich kind of guy.

11. What do you find deeply satisfying?


PAUL HOOVER is the author of eleven books of poetry including Sonnet 56 (2010), Edge and Fold (2006), Poems in Spanish (2005), which was nominated for the Bay Area Book Award; Winter (Mirror) (2002); Rehearsal in Black (2001); Totem and Shadow: New & Selected Poems (1999); Viridian (1997); and The Novel: A Poem (1990). He is editor of the anthology Postmodern American Poetry (W. W. Norton, 1994) and, with Maxine Chernoff, the annual literary magazine New American Writing. His collection of literary essays, Fables of Representation, was published in the Poets on Poetry series of University of Michigan Press in 2004. He teaches at San Francisco State University. Check out his Poetry Blog
No comments: