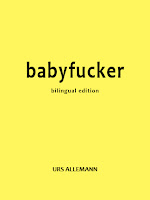 When Babyfucker won the second prize in the 1991 Ingborg Bachmann Competition, it became one of the biggest literary scandals in recent years. Some cultural critics claimed that the book was “inexcusable” and a “sexual perversion.” Over twenty years later, those are still words associated with Allemann’s text. As such, I had to be careful when soliciting authors for the blog project—asking only those authors who I knew would not be offended by the invitation. These writers were [redacted], Lily Hoang, M. Kitchell, Jon R, JA Tyler, and Jessalyn Wakefield. Their responses represent a variety of approaches to the text from playful poems to string theory. However, as google searches are many professional authors' “second CV,” there is always the looming threat that a future employee, student, or family member will discover one’s connections with those two terrible words. “Imagine children. Imagine being a child. Imagine the fear of cooties. That’s contamination sensitivity,” Lily Hoang writes in Disgusting Desire, her response to Babyfucker. “We don’t want someone else’s cooties touching us, or else, we will be contaminated and there’s no hope once you’ve got it. You’re fucked.” In this sense, the Babyfucker Blog Project is also an invitation for you, the reader, to be contaminated, to join the conversation.