Check out these recent reviews of Les Figues titles I'll Drown My Book,  By Kelman Out of Pessoa, and Tall, Slim & Erect: Portraits of the Presidents.

I'll Drown My Book reviewed in the new issue of Diagram

"It makes its own rules and sometimes it follows them, which implies that you, reader, too, should make your own rules and sometimes follow them. It's a koan of a map to some writers you probably don't know and you might love. It acknowledges that we can't possibly be expected to understand ourselves unless we listen to each other while recognizing too that it is our task alone to understand ourselves. I want to pick it up and ask it a divinatory question and put my hand on a random line again, and in return Dodie Bellamy says "My thoughts flutter down your purple neck and that gives me a hard-on." What else could I want from something like this?

Tall, Slim & Erect: Portraits of the Presidents reviewed by Emily Kiernan at HTMLGIANT

"The president as person means something different and perhaps something less than the president as figure, and the attempt here to humanize is less interesting for its success or failure than as a catalogue of what it might mean to humanize a public figure. A president is, after all, a human, but one who has been so denatured by his role that we must embark upon these kinds of recuperative missions to see him as such. Do we become more human in one another’s eyes through the workings of our bowels or the oddities of our forms? Perhaps these are the very things we need to strip from our leaders in order for them to lead, fearful that too much body will leave them mired in the petty and personal. Or perhaps in confronting the truthlessness of history, these are simply the easiest elements to give back to our presidential figurines. "

By Kelman Out of Pessoa reviewed by J.A. Tyler in NewPages


"As a moment of recon, gathering data and spilling it onto the page in words and plot-lines and images, By Kelman Out of Pessoa succeeds. The narrative shifts are unpredictable thanks to their grounding in gamed risk, and the language is its own amalgam of plot-driven characterization and constant word-play, always switching and reversing and reiterating itself in the form of manipulated sentences..."

The Empty Globe May 5: Abelkop and Durbin 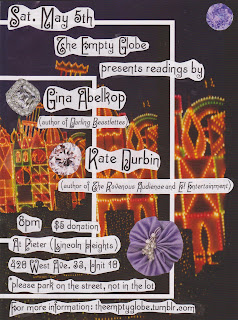 Saturday, May 5th at 8 PM: Gina Abelkop and Kate Durbin

$5 donation, or pay what you can

Gina Abelkop is a Pisces living in Northern California with a pug named after Ava Gardner. She is the founder/editor of the DIY feminist press Birds of Lace and author of Darling Beastlettes (Apostrophe Books, 2012). Visit her online at http://themoonstop.blogspot.com.

Kate Durbin is a Los Angeles-based writer and performance artist. She is author of The Ravenous Audience (Akashic Books), E! Entertainment (Blanc Press Diamond Edition, forthcoming), The Fashion Issue (Wonder, forthcoming), and, with Amaranth Borsuk, ABRA (Zg Press, forthcoming). Her projects have been featured in Spex, Huffington Post, The New Yorker, Salon.com, AOL, Poets and Writers, TMobile’s Digital Daily, Poets.org, VLAK, Lana Turner: A Journal of Poetry and Opinion, Black Warrior Review, Joyland, berfrois, SUPERMACHINE, Drunken Boat, NPR, Bookslut, Fanzine, and The American Scholar, among others. She is founding editor of Gaga Stigmata, an online arts and criticism journal about Lady Gaga, which will be published as a book from Zg Press in 2012.
1 comment: 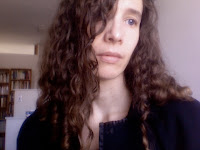 I am deeply satisfied by work that extends a long way into the playful joy of manipulating its media, that gets beguiled by spatial, sonic, etymological or chromatic (etc.) progressions, gives in to the fascination of arranging and rearranging the matter of which it is made—and then looks up from itself, breaks the spell of self-generating abstract relationships, and drops back into a simpler, more mundane diction, the blunt lingua franca of “I do (feel, notice, desire, struggle with) this, I do (don’t, can’t, work at, wonder) that.” Though often I don’t know who “I” is in either clause.

2. Where did you come from and are you happy that you're no longer there?

I am from San Francisco by birth and Chicago by childhood experience. For many years in New York I mourned for the outline of the Headlands in that particular planar, silvery, Pacific light. And recently I had a Proustian experience triggered by the smell of diesel mixed with cinnabons and perfume in O’Hare. I’m glad to have those experiences?

Someone just told me that my work is “acrobatic,” and I liked that a lot. Someone else used the word “nutritious,” which was also very gratifying.

In the sunniest, quietest, cleanest, greenest-out-the-window place available. I am a triple Virgo.

6. Please tell us about beauty, belief or bawdry. You may begin.

Belief, the earnest and dutiful middle child, gets short shrift, reads in the corner, stays home and placates the narcissists. She is quietly yet firmly horrified by her alleged compatriots as portrayed in retail politics. Actually, it’s the almighty-dollar versions of luscious surface and libidinous foldings that freak her out; belief’s homely superpower is that she morphs into beauty and bawdry both at a moment’s notice.

7. As Gertrude Stein says "let us why why." Please proceed.

In “Dinner,” in Tender Buttons, Stein says “let us why way.” In this poem, she also says:

Is this an American fantasy⎯remembered or conjured into being out of French renegade domesticity—of a time when in the acres lately, i.e. recently, imagined as wholly open there was a wagon wheel, a shotgun-toting pioneer who burst into expansive lands that Stein defines (in The Making of Americans) as shaped particularly by speed⎯and, in those time-spaces, slavery and soul-destroying race-paranoia were needless? Or⎯since words have consequences for bodies politic⎯it was needless to attempt to kill with the weapon of invidious naming? And let us, now, at dinner together, interrogate that way of being? Meanwhile door-to-door salesmen and simple memory-catalogues peddle old moth-eaten lace curtains and silver-plated spoons?

I’d like to put the best face on this, since I consider Stein A Mother of Us All. But basically I’m bummed, because I can’t help but imagine that she simply felt entitled to use the word “nigger” as a sonic shape and cultural trope without much thought. So, as writers, let’s say we make why a transitive verb to apply to those ways of working and thinking to which we are beholden…

See above, I guess.

I admire intelligent kindness. Non-brutal stick-to-it-iveness. And so many poets, and artists in many media including meditation and activism, that I won’t try to list them.

Two general questions I ask a lot are, “Why is that?” and “Do you know what I mean?” (maybe the first translates to, “Do I know what you mean?”) I also like Jennifer Calkins’s specific questions.

11.What do you find deeply satisfying?

FRANCES RICHARD'S second volume of poems, The Phonemes, is newly out from Les Figues Press; later this year Futurepoem will release a third book titled Anarch. She is the author of See Through (Four Way Books, 2003) and the chapbooks Anarch. (Woodland Editions, 2008) and Shaved Code (Portable Press at YoYo Labs, 2008). With Jeffrey Kastner and Sina Najafi she is co-author of Odd Lots: Revisiting Gordon Matta-Clark’s “Fake Estates” (Cabinet Books, 2005). She has been a member of the editorial teams at Fence and Cabinet magazines, writes frequently about contemporary art, and teaches at Barnard College and the Rhode Island School of Design. She lives in Brooklyn.