The Next Big Thing: Divya Victor 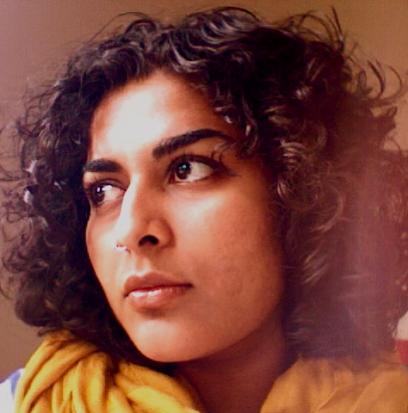 What is the working title of the book?

Things To Do With Your Mouth is the title. Les Figues is the publisher.

Who or what inspired you to write this book?

Wailing and weeping make for a great spectacle, obviously. Oprah, Ricki, Maury, Montel, Jerry and the Vatican have all made great profits from them— especially women and children, please. We are these glassy lachrymatoria—our tear ducts are banks that weep out gold. Remember when the mourners at Kim Jong Il’s funerals were imprisoned for not crying sincerely enough? Tears for gold, asshole. Except, there was no gold. Tricked. Weepers should unionize.

Therefore, I've been thinking some about the increasingly obsolete practice of moirology—the practice of hiring professional mourners. If you were a rich person, you’d pay someone some money to come and wail and beat their chests at your favorite corpse—your dead father, your dead uncle, your landlord etc. There are women who are hired to cry, wail, and lament for dead strangers— the rudaali of India, the crying women of the Philippines, the carpideira of Brazil. But how they cry for strangers, how they take their tears from some unknown place and give them to some unknown person, how they repeat their performance everyday— and they do this for pay— is nice to think about. Moirologists are paid for their memorialization. The performance of mourning is purely professional—a product of practice. How might poetry resemble this work?

I enjoy thinking about affective labor that is entirely for purchase, for sale. It gives me immense pleasure to know that crocodile tears can be swapped for some kind of purchase in identity politics, post-colonial mourning, whatever gets you the job. Can the subaltern cry wolf and get away with it?
In other words, how much sincerity do you expect to get for an $18 SPD book?

Where did the idea come from for the book?

The idea for this book came from where all ideas come from-- other people's ideas. Tzara says that all thought begins in the mouth. Or, more accurately, in other people's mouths.

I get all my ideas from the research I do for my own scholarship. From these ideas I excise of all the affects, histories, and narratives of my own everyday life and put them in a drawer for when my union will pay for psychoanalysis. The rest I make into poems as fast as possible.

That said, the specific notion from which this book emerged is historical. During the late Middle Ages, German-Jewish women who were accused of witchcraft and of eating children were hunted and executed by vigilantes who were afraid that their flesh would be devoured by women with excessive powers of speech and discourse. Before executing these women, the murdering fearful (“faithful”) would allow the accused woman to atone for her chatty, witchy, baby-eating ways if she told them a way to stop her dead comrades from eating flesh from their graves. The fear was that these women continued to have the use of their mouths even after they died. So, one accused woman suggested that they fill the corpse’s mouth with gravel as it laid in its grave. Another woman suggested that they drive a stake through the coffin, right through the corpse’s open maw, until it pierced the skull and went through, pinning the woman to the earth.

The fear of speaking women obviously has a very long history, but the resourcefulness that we’ve shown in silencing these women has not always been as metaphorical as it is now. Fleshy solutions were it. So, for poetry today to approach its feminist purpose, it must address the vocalizing and silenced mouth— it must reorganize the work of this opening. I therefore wanted to make a book that did this to the most minimal degree. The work of this book of poetry is to repeat, recant, and endlessly say again what has already been said. Because it can.  Because it doesn’t mind being a corpse with a mouth full of gravel.

What genre does your book fall under?

Labiomancy and Self Help? Possibly poetry.

What actors would you choose to play the part of your characters in a movie rendition?

The movie rendition of this book will probably be a scene by scene recreation of The Exorcist by Michael Haneke. All the drama of the social contract, none of the terrible pea soup vomit. No, I'm kidding. It will only be pea soup vomit. Sort of floating in its own abject electromagnetic field.  Therefore, I will probably cast Juliette Lewis to expel it and consume it over and over again.

What is the one sentence synopsis of your book?

The mouth of discourse and the mouth of silence are of one breath, one flesh.

How long did it take you to write the fir st draft of the manuscript?

As long as it takes to hire a professional mourner these days, but longer than it takes for them to be done crying at some stranger's funeral and get paid. So, about a year.

What else about your book might pique the reader’s interest?

It contains specific instructions for committing infanticide as well as tips on how to make gags for your lover.

Will your book be self-published or represented by an agency?

Les Figues Press will release and curate the book's life.

My tagged writers for next Wednesday are: